No, but seriously, why? I’m not talking about inadvertent stupid things, like dating someone totally wrong for you, who ends up breaking your heart into tiny little pieces (Ahem. Not that I’ve ever done that.). Or buying a pair of shoes that you just have to have, and never wearing them (I absolutely don’t have approximately ten pairs of shoes that fit into this category.). I’m talking about common-sense and/or safety things that people everywhere—not just smart people—know not to do, and yet people continue to do them. Like, all the time.

For instance, not wearing a seatbelt. I mean, really? First of all, it’s required by law, so there’s one really good reason to wear one. Secondly, it’s approximately a million times safer to wear one (not that I’m a mathematician or anything, so don’t quote me on that).

My cousin’s son was in a car accident a week ago, along with his girlfriend, and another friend. They were in an open-top Jeep. None of them—in either car—were wearing seat belts. The friend saw what was going to happen and jumped out, he was uninjured. The other driver had minor injuries.   The girlfriend died at the scene. My cousin’s son died two hours later. He was 26. 26. That is so young. He had his whole life in front of him. I hadn’t seen him in years, but he was really close to Baby Brother in age, and they played a lot as kids. Obviously, the possibility exists that they still would have died if they had been wearing seat belts, but odds are good that they wouldn’t have. They might have escaped with only minor injuries, like the other driver. Instead, his family and friends are left to grieve.

The Diva never wears a seat belt. She drives, cell phone in hand, without one, and doesn’t get why it annoys me. Simple answer: I don’t like stupid people. You are doing a stupid thing—and you know it. Therefore, you have now backslid on my List of Smart People in My Life. To, approximately, 55,721. (And yes, Diva, I know you’re reading this. If you continue to do this, the next time you call me to complain about stupid people, I am hanging up on you. You’ve been warned. I don’t care if the girls are too big to fit comfortably in one. Suck it up. I want you around so we can do wheelchair races in the nursing home.)

Or, say, quitting cigarettes and starting to smoke Swisher Sweets instead. Just because they aren’t cigarettes, doesn’t mean they’re not bad for you. (Work with me here, Baby Brother. You’re one of the smartest people I know. Act like it.)

Seriously. Smart people who do stupid things need help. Or, as we say in the south, “Bless their hearts!” 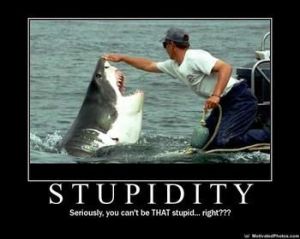