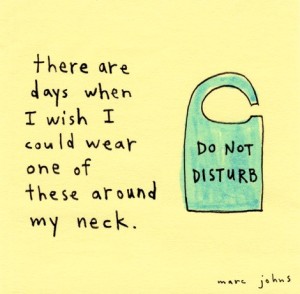 You know those days where no one bothers you and you spend the day at peace and not disturbed?  Yeah, me neither. I could hang one of these signs around my neck and it would probably burst into flames. I am that disturbed.

The Diva isn’t working with me now, so yesterday sucked, although it was due to circumstances in general, not necessarily because she wasn’t there (although that didn’t help). We started late due to technical difficulties, and 20 minutes after we got started, everybody and their mama needed my help, meaning my own patients had to wait. Then I decided someone else could do the helping, as I am getting paid to do my own job, not everyone else’s, so I got the new boss and handed the problem off to her. #ijustdon’tcareanymore (Ha. I’m not on Twitter, but this is how I feel.)

Another sucky thing:  Steve. And his tendency to fall off the face of the planet because he’s depressed. (Seriously?  I get that you’re depressed and don’t feel like talking. But answering one text message and telling me you’re still alive does not seem excessive to me.)  His lack of communication is driving me crazy. (It’s a short drive.)  Almost as crazy as the fact that I’ve had the same conversation three times in the past week, and he still isn’t getting it.

…a few random conversational messages:  How was your day? How are you feeling? etc.

Steve:  Why don’t you come over? I want to see you.

Me:  (Not pointing out that that statement is pretty funny, considering I haven’t seen Steve in weeks) Do you know what a booty call is?” (And what I am not?!)

He got another call at that point and had to go. So I texted him the Urban Dictionary’s definition of “booty call” (since he’s not from around here and sometimes doesn’t understand American slang), along with something along the lines of “Not gonna happen, and if you don’t want to see me any other time besides the middle of the night, you’re not gonna see me!” Got a very apologetic response a bit later, went back to sleep, thinking I had made my point.  Only to have almost the exact same conversation two days later, at midnight. (Seriously? I will accept “language barrier” as an excuse only so many times.) Three nights later, same conversation again, this time at 9:30 p.m. and on the phone.

What the heck? What is wrong with this picture? I know depression sucks. But I do not remember it making me completely oblivious and selfish.