Linking up with Meghan over at Clean Eats, Fast Feets for this one.

So, yeah, the way my life is set up, it sort of feels like “What holiday?” I work in healthcare. We don’t really get time off for the holidays. Our patients depend on us to keep them alive. My schedule was pretty much the same as usual last week.

With the exception of a plethora of yummy baked goods (that I forgot to take pictures of because we were too busy eating them, hello). A few gifts:  truffles from the doctor, fragrant (in a good way) lotions, a snugly homemade blanket (from an awesome patient), lovely homemade soap, and just generally trying to lift the spirits of sick people who don’t have much to smile about.

Most of my family lives away, and since I couldn’t take time off, I had to settle for saying Merry Christmas by phone.

Christmas Eve was great:  The Saint and I went to the Candlelight Service at Gateway. I wish I had a picture of this, because it was absolutely beautiful (There is a pic at the above link.). Most secular Christmas music annoys me after a while—when they start playing it on November 1st (one holiday at a time, people!)—but I completely enjoyed these Christmas carols. The part with modern dance was amazing, and the medley of Christmas songs with the piano and guitar was mind-blowing. As was the part with the candles.

Then we hit up Chef Blythe’s Southern Kitchen for a late lunch. I had the Hangover Burger.

Yes, that is homemade mac and cheese on the burger, and a fried egg (It would have been even yummier with a runny egg, but frankly, it was already so messy to eat that I’m not sure how that would have worked out.). Plus a Bloody Mary, because they’re healthy (right?).

Christmas Eve evening was low-key and involved a nap and reading. And maybe a midnight text I received that just generally aggravated me and made me want to scream. But I digress…

Christmas Day I chilled at home for a while, then went over to Baby Brother’s for lunch and a movie. 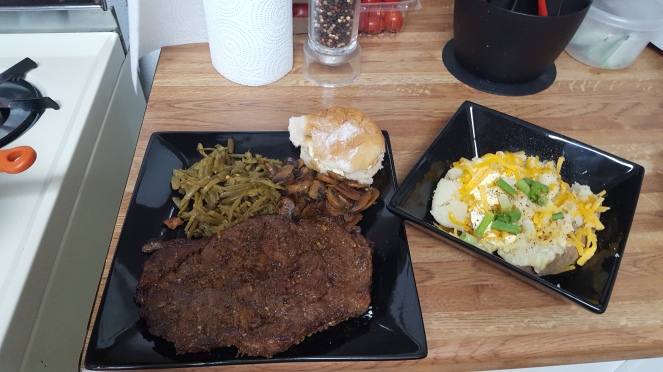 In the interest of full disclosure:  Baby Brother has always wanted to be a chef (since, like, age 2) and he cooks a mean steak—like, I only order steak at a select few restaurants because most do not measure up to the ones he grills—what I’m saying is:  this rib-eye was amazing!  (Also, I did not eat all of it—I took the rest home.) Then we watched the new Independence Day, because I almost never watch movies (no time), and he has a good set-up for indulging in one, plus about a thousand movies, most of which I’ve never seen.

Then I went home, so I could be at work at 4:30 a.m. yesterday. Sadly, I woke up at 1 a.m. and could not go back to sleep—stupid insomnia. I fully expect this to be a regular occurrence until I get some stuff worked out mentally, but it still sucked. However, we were missing some patients due to the holidays, so I did get to leave at 3 p.m. and head home to take a nap.

And that’s about it for me.

I hope everyone had a Merry Christmas!

4 thoughts on “week in review: what holiday?”