I tried to take it (a little bit) easy, since this week was spring break. (Cue skeptical laughter here.)

The spring time change always really messes up my sleep schedule for a while, so I didn’t sleep much on Sunday night. Monday morning had me doing my zombie impression, and I wasn’t too quick on the uptake at work. Fortunately, a lot of our patients elected not to show up, and I left work early—at around 2 p.m.(a less-than-10-hour day!)—and headed home to take a nap.

Which didn’t happen. I tried for two hours, dozed a bit, then eventually got up and did some stuff, watched TV, and then read until like 11 p.m…because I still couldn’t sleep! Sigh…

On Tuesday, I tried out the concept of daily pages again. A timer and ten minutes at the computer, writing about anything I want, supposedly every day. (I say “supposedly” because that happened on Tuesday…then on Saturday and Sunday). It’s a start, to get me back in the habit of writing again. Now, I need to look for some sites that I might be able to write pieces for.

And I used one of those sessions to start feeling out a character I’m getting to know, named Nepenthe. (True story:  at least a year ago, that name popped into my head out of nowhere, and I knew it was a character’s name for a story I hadn’t even considered yet. I’m betting her mom is a hippie and her father is some sort of literature buff.) We’ll see.

I did two book reviews, The Heart Between Us and In Search of Us. I read In Sight of Stars, Rosie Colored Glasses, and about 25% of A Guide for Murdered Children (before realizing I had no idea what was going on…and could not have cared less). The first two were great reads, both deal with mental illness. Rosie is actually told from a child’s POV, which was interesting.

After church, I tried out the poke bowl from Pei Wei. Spoiler alert:  it was awesome! (And healthy.) 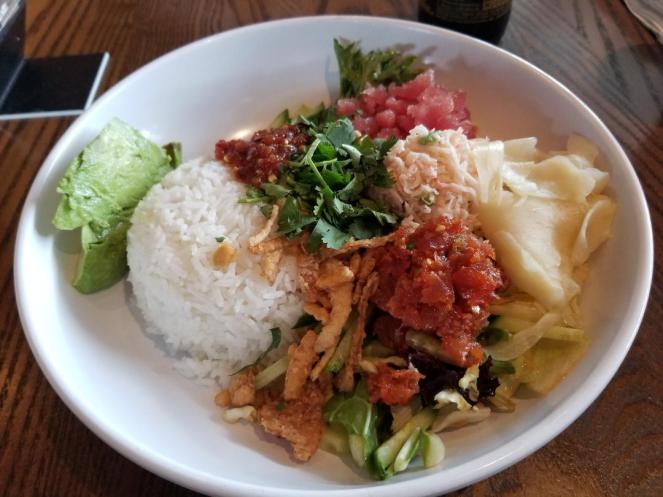 For the second week in a row, I hit all my scheduled workouts! Including 7.25 miles on Sunday (there are so many hills where we were, my Fitbit said I climbed 43 flights of stairs!)

And I just THOUGHT those hills were killer!

I also got a new pair of Altra Women’s Intuition, for long distance walking. Hoping they work out…

And that’s it for me.