This past week has been one big blur of activity. Seriously.

-On Monday, I worked 14 hours or so, trying to get everything possible done so I’d feel less guilty about working shorter days the rest of the week.

-On Tuesday, I picked up my parents at the airport in the afternoon, and we met Baby Brother for sustenance:

Yes, this was as good as it looks. (And I feel like I should say that I had it for two meals, because I couldn’t finish it in one.)

-On Wednesday, I only worked about 12 hours, but I accomplished a lot, including one very important phone call to get an issues taken care of that I’ve been working on since January…while simultaneously texting two other people about different issues, getting paperwork together and labeled, and dealing with staff who somehow couldn’t see that I was clearly on the phone when they wandered into my office and started talking. #multitasking

-On Thursday, I took my parents to see my grandmother, two hours away.

She was very surprised! She’s 90, and the doctors can’t really do much for any of her health issues, so any opportunity for my dad to see her is a blessing. Thursday was also the 14th anniversary of my other grandmother’s death, which I didn’t realize when we stopped at the cemetery. I took a few pics for my mom. 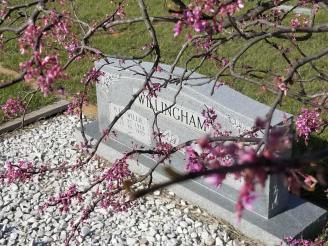 On the way home, we also stopped so Mom could visit her brother and sister-in-law. Saw a few wildflowers as well, although I was driving, so I couldn’t get any great pictures.

(This second picture is disappointing, because these flowers were so many different colors! The wind and dust were horrible, though.)

-On Friday, I worked nine hours, did a few errands, and got my parents out to the boss’s place for the wedding rehearsal and dinner. (WHY don’t I have any pics of her beautiful land? SMH.)

-On Saturday, I started the day with a 10-mile hike/walk, paid  bills like a responsible adult, took a nap, then got dressed for the wedding. Which was outside. Where the temperature had dropped from 85 on Friday, to in the 30s…with wind gusts of about 20 mph. It was at sunset, beside a pond, and it was absolutely beautiful and appropriate for the couple.

-On Sunday, I went to church. I’ve been stalking social media ALL WEEK, because last Sunday my pastor was careflighted with internal bleeding, had to have three emergency surgeries and 10 units of blood components, and we almost lost him. Social media has been blasted with prayer requests and prayer vigils in 48 countries, and around 250,000 people responded with comments saying they were praying. It was on several Texas news stations as well. (His Instagram has the updates.) We are blessed that he will be released from the hospital on Monday morning, after this ordeal. (And I can go back to mostly ignoring social media.) Another of our senior pastors had a major heart attack 6 days ago, but he’s doing well. #underattack #prayerworks

I only did one book review, In the Shadow of 10,000 Hills, which you should definitely go read, because it was phenomenal!

2 thoughts on “week in review: whirlwind”